Remembering My Dad And Movies

It's still kinda hard to believe that my Dad passed away some six months ago. And that today is my first Father's Day without him...It's been hard but thankfully I have an excellent support system that is helping me muddle though.

Just as did with my Mom I want to devote some space to share my movie memories that focus on him....

Dad HATED going to the movies. He thought everything was overpriced (He's not wrong there!) and did not like sitting in a darkened theater for very long. The last film he saw at the cineplex was the Oscar-winning epic Titanic for heaven's sake--believe me with a 3 hour plus running time it was a tough slog for him. When I asked him later that day what he thought of James Cameron's hit film; His reply? "It was OK." He could not understand what all the fuss was about.

My parents shared many favorite films: The film saga of Rocky Balboa; Mel Brooks' comedies like Blazing Saddles, Young Frankenstein, and High Anxiety; the first two Godfather films--that said he also had his own list as well. His favorite actress was Sophia Loren. She has talent to be sure. But I also think her Italian accent had a lot to do with the reason she was tops on his list. Yeah let's go with that. Among actors  Sean Connery and his exploits as James Bond were tops. He may not have enjoyed watching films with a long running time in the theater--in the comfort of his home--length did not matter 1970's biopic Patton starring the great George C. Scott in the title role (A must watch if you have never seen it), the star-studded biblical story The Ten Commandments (1956) and it's cousin--the original Ben-Hur (1959) were favorites. I wonder how he would feel about the upcoming remake of the latter?

I remember being in another part of my childhood home while my folks were watching television in the family room. I was working on a paper for one of my film classes--trying to beat back a case of writer's block for my conclusion. I was startled out of deep concentration by the sound of uncontrolled and very intense laughter. The sound originated from dad. I first thought he was in some sort of dis-stress...I rushed out to see what was going on...To my surprise by the time I got there dad was literally falling off our love seat--laughing so hard I thought he was gonna wet his pants. As it turns out he and mom were watching the comedy  “What About Bob?” In the film a successful psychotherapist/author (Richard Dreyfuss) loses his mind after one of his most dependent patients, (Bill Murray) a manipulative, obsessively compulsive narcissist, tracks him down during his family vacation.

Here's one of the bits Dad loved:

When I told Dad that I was quitting my job to make a short film---he was not a happy guy and not very supportive of the decision at all. It was a pretty heated exchange--I said things, he said things, pretty bad...I realized soon after that, just like Mom years earlier, he was just looking out for my best interest. I forged ahead with my writer/cinematographer Matt. While we were filming on location, he surprised me pulling up in his car, saying he wanted to see what we were up to. I don't think he had a clue what was happening. By the end of his set visit he helped us get some tricky shots on film--and then offered to buy everyone lunch. Once "Crossroads" was completed and he watched it he was all smiles. He did have one criticism--"I could have done without all of those curse words". Mind you growing up I heard Dad curse up a storm almost every day without much concern for my virgin ears...I treasure the footage that he helped us get and his set visit meant a lot.

Gosh I miss you dad--I wish you and mom were here...Thanks for all of your love and support. Some days are really rough. Love your son...

This post is also for my brother Nick--who is also a father to three girls--I love you...
Posted by Tom @ 3:01 PM 2 comments

Variety reports that Zac Efron is in talks to join the long gestating musical biopic The Grenatest Showman on Earth.

In development for nearly a decade, the film will tell the story of American showman P. T. Barnum (Hugh Jackman) who had a knack for hoaxing a gullible public even as he created the three-ring circus that made him a household name. The pic also traces his infatuation with singer Jenny Lind known as the Swedish Nightingale. The Lind role was being eyed for Anne Hathaway way back when...Now it's uncast.

Efron's role is not yet known.

Michael Gracey will direct the project.

Jenny Bicks wrote an early script draft with British pop singer-songwriter Mika to write the music and lyrics for the film. Filmmaker Bill Condon was then hired to write a new draft in 2013. 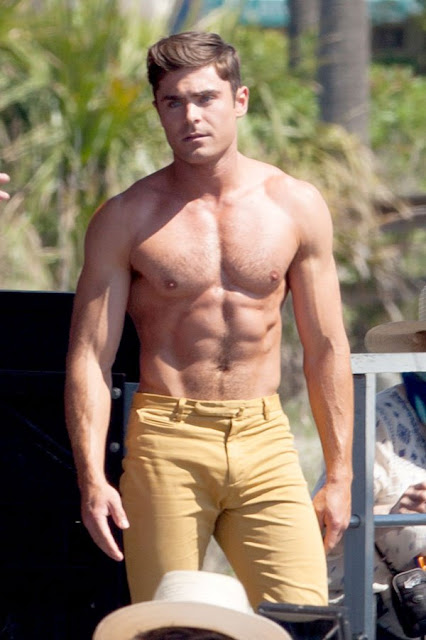 It's hard to believe that it has been 2 years since Universal Pictures released the R rated comedy Neighbors. Since I liked the original flick quite a bit--my expectations for "Neighbors 2: Sorority Rising" going in-were perhaps a bit higher than they would have otherwise been. How does the sequel measure up? 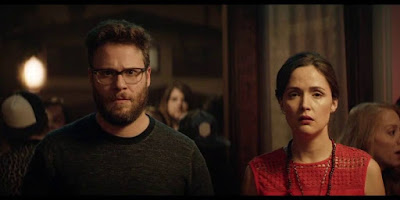 As the film opens we find out that Mac (Seth Rogen) and Kelly Radner (Rose Byrne) are expecting a second child. With the family about to grow--the couple decide that they are ready to make the final move into adulthood: the suburbs. But just as they thought they’d reclaimed the neighborhood and it was safe to sell, they learn that the new occupants next door are a sorority even more out of control than Teddy (Zac Efron) and his brothers ever were.

Tired of their school’s sexist, restrictive Greek system, the unorthodox ladies of Kappa Nu have decided to start a house where they can do whatever they want. When Shelby (Chloe Moretz) and her sisters, Beth (Kiersey Clemons) and Nora (Beanie Feldstein), find the perfect place just off campus, they won’t let the fact that it’s located on a quiet street stand in their way of parties as epic as the guys throw.

After Teddy's best friend Pete (Dave Franco) gets engaged--he finds himself homeless-striking a deal with the Nu girls for a place to live in exchange for his expertise on how to work the system. The Radner's are desperate to ensure that their home sells without any problem. Easier said than done. Soon though Teddy is given the boot by the gals and he switches sides as a secret weapon for Mac and Kelly... 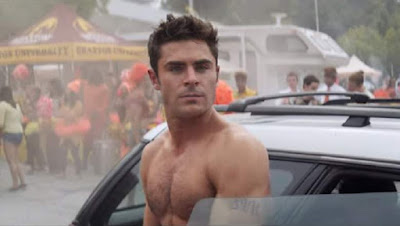 Once again the original film's director Nicholas Stoller as well as writers Brendan O'Brien and Andrew Cohen return to steer the festivities.  Rogen, his pal Evan Goldberg and Stoller helped out with the script this time. As before, (mostly) everything works. The film is light on it's feet and very raunchy fun.

Efron's comedic muscles continue to flex with a turn in the adult laugh-fest Dirty Grandpa as well as the upcoming Mike and Dave Need Wedding Dates and next year's Baywatch movie. It remains to be seen whether or not those not yet released movies portend that this is a good career trend for him. So far so good. He has shed his teen beginnings and High School Musical for sure.

The filmmakers know what worked before and didn't really change the recipe--the entire cast works well with each other. Happily the Radner's best friends Jimmy (Ike Barinholtz) and Paula (Carla Gallo) are given a bit more to do here. The newbies Moretz Clemons and Feldstein make fine additions. As leader Shellby--Moretz is just great! Characters we like and care about is the film's secret weapon amid all of the f-bombs and airbag gags. 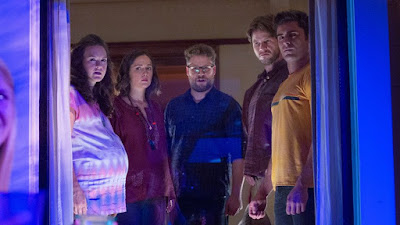 Neighbors 2 is that rare comedy sequel that works out very well--that said--I hope the team thinks long and hard before making a third one...
Posted by Tom @ 2:35 PM 2 comments

One of the series that I am currently working my way through is the now completed Netflix original Hemlock Grove. I am about halfway through the 2nd season and I am really digging it.

Well now Heat Vision reports that one of its stars Bill Skarsgård is talks to join the newest two-part film adaptation of author Stephen King's novel It. 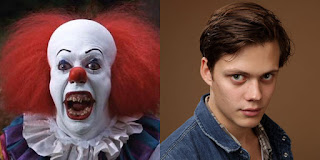 The story follows a group of teen outcasts (called 'The Losers Club') in 1958 who encounter 'It', a shapeshifting creature that feeds on children and whose favorite form a sadistic clown called Pennywise.  And then In 1985 the creature resurfaces. The kids, who're now adults, must take on the demon of their childhood again - this time in a different form.

Skarsgård (who played Roman Godfrey on Grove) is said to be the frontrunner to play Pennywise--and based on his work for the Net show--I think he'd be a great choice. Will Poulter (The Revenant) was previously eyed for the role when "Sin Nombre" director Cary Fukunaga was set to call action on the project. Poulter had to step out due to scheduling conflicts. “Band of Brothers” star Kirk Acevedo was in the running as well.

Jaeden Lieberher (St. Vincent), Finn Wolfhard (Stranger Things), Jack Dylan Grazer (Tales of Halloween), Wyatt Oleff (Guardians of the Galaxy), Chosen Jacobs (Cops and Robbers) and Jeremy Ray Taylor (Alvin and the Chipmunks: The Road Chip) are said to be in talks to play the young incarnations of the group of friends.

Andy Muschietti, who directed 2013’s “Mama”, will sit in the big chair.

The book was previously adapted as a solid 1990 2 part TV mini-series with John Ritter, Harry Anderson, and Tim Curry ('The Rocky Horror Picture Show') as Pennywise that was directed by Tommy Lee Wallace.
Posted by Tom @ 11:55 AM 0 comments