I recently took some time out to watch the 2015 low budget Canadian 80's horror throwback flick Dark Forest--while it boasts a strong antagonist, some inventive kills and some fine cinematography--not all of the puzzle pieces quite fit to form a cohesive whole.

The film employs the traits of the sub genre that any fan would love. Its plot is simple enough. Meet Emily (Laurel McArthur), she is in an abusive relationship with Peter (Dennis Scullard). His hold over her is so strong that she basically lives a life locked away from the outside world. Emily finally decides enough is enough--finding the courage to leave Peter and join her friends Michelle (Veronica Ternopolski), Jolene (Weronika Sokalska), and Francine (Jalin Desloges) on a camping getaway. Soon after they arrive at their destination--the ladies discover that Emily's act of courage has put them all in mortal danger....

Director Roger Boyer concocted the script with David Zellis infusing the final product with a few horror tropes that made the genre so popular in the late 70's/80's; Pretty people out to have fun, gratuitous shots of girls frolicking about in the water--in this case though the sequence is pretty tame when compared to many of the films of the era that Dark Forest pays homage to, a sex starved male character-looking to score, characters blissfully unaware of the danger that hovers around them until it's too late, among others. The cast is solid and work well--given the trappings of the horror formula here. The standout here is Scullard who is quite off-putting from the start, gets creepy and then becomes downright homicidal by the end. Some kills are very well orchestrated despite the flick's low budget. The gore is also there but tastefully executed.

The film loses points for me by introducing another set of characters in the middle of the story--whose only function is clearly to raise the body count--which is fine-but this tactic could have had  more of an impact if used earlier in the film perhaps. The 2009 Friday the 13th remake did something quite similar with better results. The movie has pacing issues too and with a running time of just 75 minutes--it's noticeable.

Those concerns aside I can still happily recommend the flick--if you are a genre devotee like me. There's plenty to like here. The film is streaming on Amazon Prime and platforms like YouTube, iTunes and Vudu. 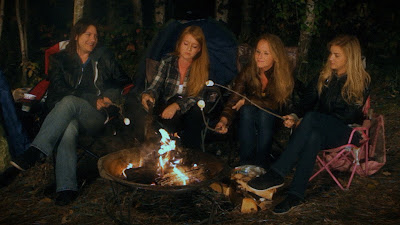 I've never heard of this, but it sounds like something I'd watch. I'll have to look for it.

I am interested to hear what you think Britt.