Silence Is Golden In Nathan Suher's "Right There"

I took some time out to screen filmmaker Nathan Suher's short film Right There.

The film pays homage to the 20's silent era and greats like Charlie Chaplin and Buster Keaton It is about a man's (Ryan Hanley) quest to gain the attention of a beautiful woman (Lauren A. Kennedy). Each day he attempts to get her attention, but this proves difficult as fate works against him. 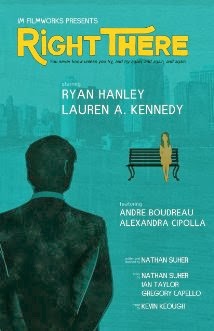 The story by Gregory Capello Suher and Ian Taylor is one that is relateable and familiar. And yet it's given a fresh spin by honoring the techniques that helped usher in the film medium.

The performances are top notch all the way around here but lead Hanley captures the silent spirit with perfection, His facial expressions say so much...doing it all. His back and forth making faces at a little girl is very amusing indeed. The greats would no doubt be pleased

The music from Kevin Keough matches nicely with the visuals as well.

Right There is a great slice of life piece of film--Saying more by saying nothing
Posted by Tom @ 6:26 PM