Filmmaker Chris Esper's certainly been quite busy since I first met him in 2013--having produced the 13 episode series In the Bedroom, launching the media production platform Stories in Motion and directing a handful of shorts--among those The Deja Vuers. 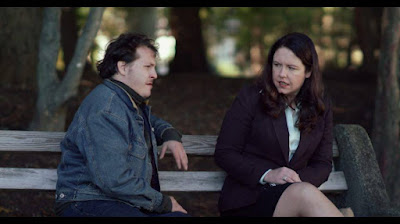 The 8 minute fantasy comedy follows Chuck (Kris Salvi) who experiences deja vu when he spots Morgan (Christie Devine) sitting on a park bench - a woman that he remembers from a dream but has never really met. When their paths intersect, a portal opens which takes each of their lives into unexpected directions.

Esper and writer Jason K. Allen have concocted a whimsical little movie that examines how we relate to our past, while living in the present, hoping for a better future. The chemistry between Salvi and Devine is quite good--leading to some very humorous back and forth. Morgan clearly wants nothing to do with Chuck--while he hopes to score a date (at least).

The fantasy element of the piece is elevated--thanks to the gorgeous cinematography by  Evan Schneider. It has a dream like quality to it with its soft lighting and use of saturated coloring. It reminds me of the way that the legendary Geoffrey Unsworth (2001: A Space Odyssey) used to photograph films. Esper's light touch certainly knows how to draw the viewer in--using a very simple filming approach and getting the most from what he has. Less is more if you will. It works beautifully here.

The Deja Vuers has received some well deserved attention on the festival circuit--and shows no signs of stopping.

Be sure to read my review of Esper's short film Still Life and the interview I conducted with him shortly thereafter. Also check out my review of "Always a Reason" and  "Steak Knives"--from his filmography. You can follow Esper on Twitter by clicking here. Get news about Stories in Motion on Facebook
Posted by Tom @ 6:48 PM