I recently screened Writer/Director Jared Masters' horror-slasher-comedy Teachers Day Does the film make the grade? Or should it get sent to detention? 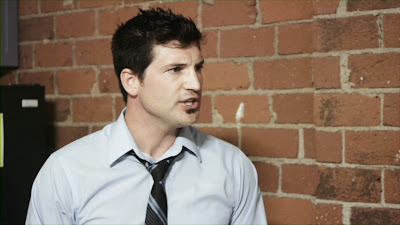 From its clever opening credits sequence to its final frame--It's pretty clear that the folks behind the film have watched a lot of horror films from 30 years ago. Rather than the PG-13 watered down stuff that permeates the genre's fare of today...TD has all of the things that were considered staples back then--A few examples--a masked killer out for revenge, a male arrogant jock type (Andrew Phillips) who has a girlfriend but wants to have sex with every other female character in the flick, there's plenty of colorful metaphoric adult language, scantily clothed females running about as well as some oh-my nudity as well!

It's all done very well as it winks at the audience the whole time not taking itself too seriously--The film knows what it's going for and is unapologetic about it. The performances are solid with everyone  working to ensure the homage pays off--Sure it's silly fun to be clear--Still Masters doesn't let the proceedings veer too far. The film boarders on camp--getting close to that edge--but never crossing that line.

There are some clever kills in the movie--one in particular features a cool camera angle while having some fun playing an outdoor game using water. The scares are there but some of them are offset by the humor of the situation.

Be sure to read my interview with Masters and producer/musician David Petovar about the film that I conducted last Summer.
Posted by Tom @ 3:25 PM