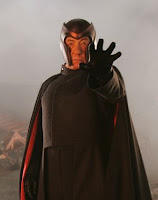 The resoning behind this news makes perfect sense

Producer Lauren Shuler Donner tells Crave Online that we won't be seeing an "X-Men Origins: Magneto" flick mainly because the Bryan Singer-produced and Matthew Vaughn-directed “X-Men: First Class” will use much of it instead

Asked about the possibility of a Magneto stand-alone film, she said "there's internal discussions but probably not It kind of got incorporated into [First Class], a lot of it."

She said that parts of David Goyer's "Magneto" script will appear in "First Class" which chronicles the young Professor X (James McAvoy) and Magneto (Michael Fassbender) when they were close friends who worked together to stop a common threat.
Posted by Tom @ 3:09 PM