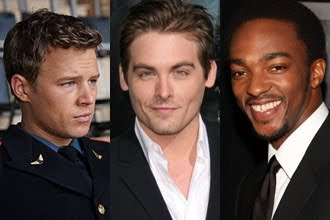 Are they in competition with one another for a single role or are several parts to be cast.

Tom Cruise, Ving Rhames and Simon Pegg are already set to work on the project

Egan is 26-year-old Australian actor who first scored fame as a young blond hunk on the soap "Home and Away", the beach-set drama which helped launch the careers of the likes of Simon Baker, Heath Ledger, Isla Fisher, Melissa George, Naomi Watts and Chris Hemsworth.

Moving to the U.S., he scored minor roles in "Resident Evil: Afterlife", "Eragon" and the mini-series "Empire" before landing the lead role in NBC"s acclaimed but short-lived U.S. monarchy series "Kings". He most recently played the male lead in "Letters to Juliet.

Zegers first rose to fame as a child actor in the Air Bud movies before scoring roles in films like Dawn of the Dead "Frozen" "Wrong Turn At only 25, Zegers has a whopping 59 film and TV credits to his name.

The 30-year-old Mackie made up in 2002's 8 Mile" and has been working ever since including in,"Half Nelson,"Eagle Eye and last year's Oscar winning "The Hurt Locker".

Mackie appears in the upcoming "Night Catches Us" The Adjustment Bureau" and Real Steel as well .